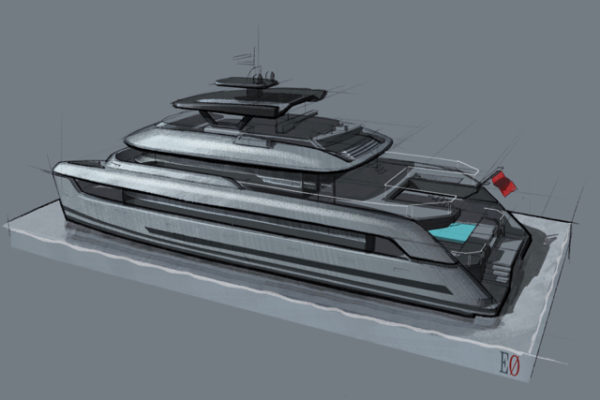 Øino said the environmentally-friendly SilverYachts hulls reduce wave resistance at higher speeds and that this concept is “now taken to the next level with the creation of SpaceCats”.

“These power cats have even higher length-to-beam-ratio hulls than the well-known Silver series monohulls, further reducing resistance, and thus power needs, while providing a generous platform with unparalleled possibilities for highly-versatile layouts normally found only on much larger yachts,” he said.

“With its 35.5m length and 13.3m beam, the SpaceCat offers two generous volumes. The external living area boats over 575sqm of space, while the interior areas are over 300sqm. The volume of the SpaceCat can be compared with a 50m monohull, and its roomy spaces definitely imbue a large yacht feeling.”

The introduction of the SpaceCat, said Kan, “comes hand in hand with the strategy of expanding the Perth-based superyacht builder SilverYachts with the establishment of an additional shipyard in China.”

“Located in Jiangmen in the Pearl River near Guangzhou, this yard has been fabricating marine aluminium structures and components since last year, and will be the main facility to build the SuperCat series of vessels. 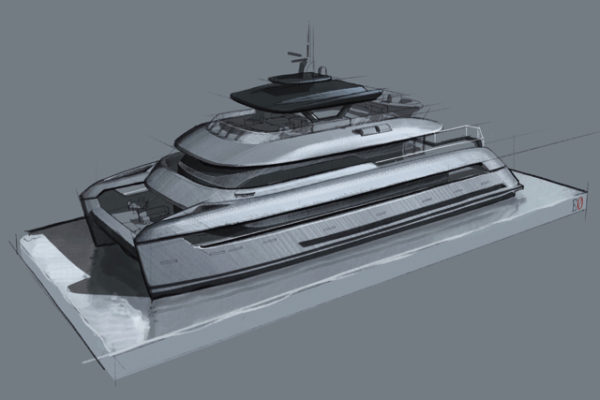 Designed by Espen Øino, the SpaceCat has over 575sqm of external living space and more than 300sqm of interior area

“Construction of the first SpaceCat will feature a highly-specialist team of aluminium fabricators hand-picked from China and working under the close supervision of SilverYachts’ Australian management team.

“Driven by the vision of majority shareholder China Zhongwang Holdings, the Hong Kong-listed aluminium group, and founder Guido Krass, the German eco-industrialist, who has multiple greentech businesses predominantly in Europe, the SpaceCat will ultimately be manufactured as a production line, starting with two vessels and gradually moving to 10 simultaneously.

“SpaceCat marks the gradual diversification of SilverYachts product portfolio, adapting to the different demands of the superyacht market in new geographies.

“By introducing SpaceCat to its fleet, SilverYachts is showcasing its capacity to not only build large superyachts for experienced owners, but also to cater to clients who are trying a superyacht experience for the first time.

“SpaceCat’s target clients would on one hand be superyacht owners who, instead of having one large vessel, opt for three SpaceCats. The yachts could be positioned in the three main cruising waters – Asia-Pacific, the Med and Caribbean – avoiding any hassles of repositioning and non-availability.

“On the other hand, SpaceCat will also appeal to clients who have a production yacht, and wish to upgrade to a larger superyacht. They have this option to take a step into yachting without the high operational costs of employing a large crew, while enjoying a vessel with large volumes.

“SilverYachts envisages the SpaceCat being a popular choice in the cruising waters of Asia-Pacific, such as Thailand, Indonesia, Malaysia, Hong Kong and Australia. The SpaceCat could also be a very interesting vessel for charter, no doubt appealing to charter companies”.

Kan also said that SilverYachts Western Australian-based shipyard maintains its position as a technological frontrunner, with a new series of larger vessels targeting the upper segment of the international market.

SilverYachts’ 85m Silver Loft is nearing completion, while the design team works on the next project, the 85 m Silver Square, which will be unveiled next year.