Asia’s builders continue to be a significant force in the 24m-plus superyacht sector according to the 2020 Global Order Book, where four appear in the top 20 (a list slightly affected by the exclusion of two of last year’s top-four builders). 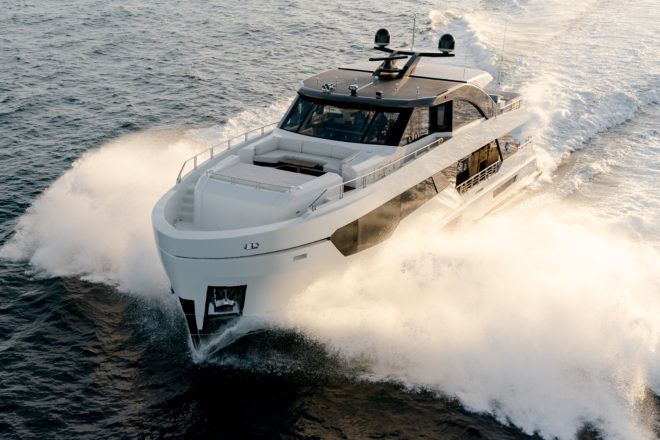 Taiwan’s Ocean Alexander and Horizon appear in the top 10, while UAE’s Gulf Craft is at 16, showing the continued popularity of these well-established shipyards founded in the 1970s and 1980s.

Meanwhile, China’s Heysea continues its remarkable rise to 12th in the list – having been in the top 30 since 2014 – as it prepares to operate a second production facility in southerly Guangdong province.

There are also exciting developments in the powercat sector as Aquila builds increasingly large models in Hangzhou, while Australia-founded brand ILIAD Catamarans has quickly established itself in the market, building designs from 50-90ft in Zhanjiang in southwestern Guangdong. 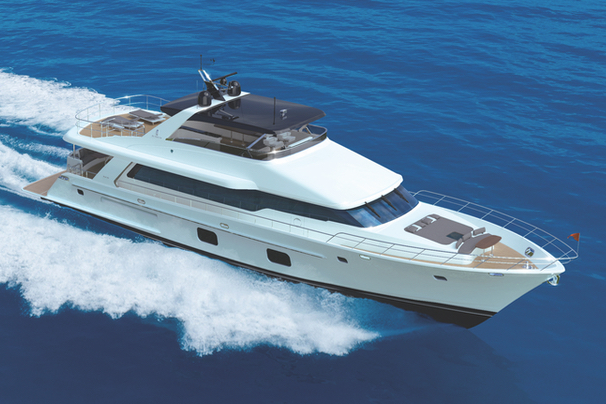 CL Yachts is a new brand in the luxury motor yacht sector, although it heralds from Asia’s most iconic and historic yacht builder, Cheoy Lee. Founded in Shanghai in the late 19th century, it has its head office in Hong Kong and a 120,000sqm production facility in nearby Doumen, west of Zhuhai.

Launched in 2018, CL Yachts has so far built its reputation on the CLB72, completing the fifth hull last December, and the CLA76. The yard is now preparing to launch hull number one of its flagship CLB88 designed by Milan-based Jozeph Forakis Design, the yacht winning the transportation category at last year’s US-based Good Design Awards.

Martin Lo, Director of CL Yachts, said: “When we began this journey, we had a strong vision for CL Yachts, to advance the luxury performance experience into uncharted territories, and to design with modern explorers in mind. Jozeph Forakis and his design team understood that vision, and were vital in bringing it to life.” A Cheoy Lee brand, CL Yachts has made an impact with its design and branding

The brand is now a fixture at major shows in the US, displaying the CLB72 and CLA76 at Miami in February. It will show the same two models at Palm Beach (Mar 26-29) and also exhibit at Newport (Sep 17-20) and Fort Lauderdale (Oct 28-Nov 1), where it will stage the world premiere of the CLB88.

CL Yachts also has strong plans for Asia and was set to debut at the Hong Kong International Boat Show at Club Marina Cove in late April, now cancelled, while it’s also looking at representation in Australia and New Zealand.

It’s also an exciting period for Aquila, which has about 350 staff and is embarking on a large product and factory expansion in 2020. In Hangzhou, Aquila is preparing to launch its new 54 power catamaran

Founded by Sino Eagle in 2012 with the cooperation of MarineMax, the largest distributor in the US, Aquila has grown its profile in Asia in recent years with the appointment of multiple dealers in the region including Simpson Marine (Hong Kong, Taiwan, Thailand, Malaysia, Singapore and Indonesia) and Saigon Yacht & Marina (Vietnam, Cambodia and Myanmar).

Aquila’s latest new model is the innovative 32 with wraparound swim platform, which premiered at last year’s Miami International Boat Show and expanded a range of powercats that also includes the 36, 44 and 48.

This year, the brand is set to enter the large powercat sector as it launches both the 54 and its flagship 70, with their world premieres likely to be at the Fort Lauderdale show. Other new models include a 28 and a new range of ribs starting with 14ft Sport and Tiller options. 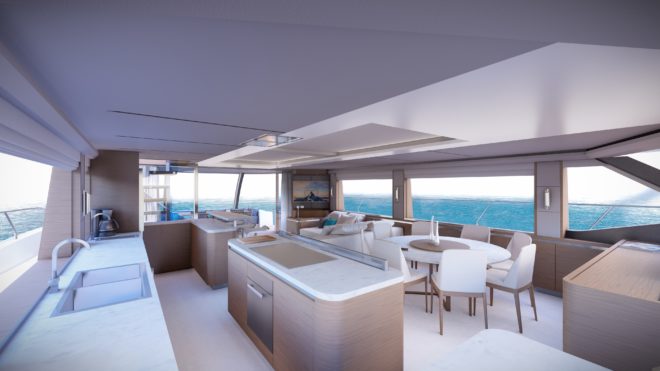 A rendering of the interior of Aquila’s new flagship 70

The company is also expanding its purpose-built facility in the Fuyang district of Hangzhou, capital of Zhejiang province.

The site opened in 2012 with a 22,000sqm shed before a further 23,000sqm was added for R&D in 2016. Last year marked the opening of a 39,000sqm shed dedicated to smaller models, and a new office building. All Aquila hulls are infused in a humidity and temperature-controlled room, while new equipment includes a five-axis CNC milling machine for tooling.

ILIAD is a new force in the powercat market and was founded by Australian CEO Mark Elkington, owner and Managing Director of dealership Multihull Solutions, so the new brand benefits from existing sales offices across Australia and in New Zealand, Singapore and Thailand. 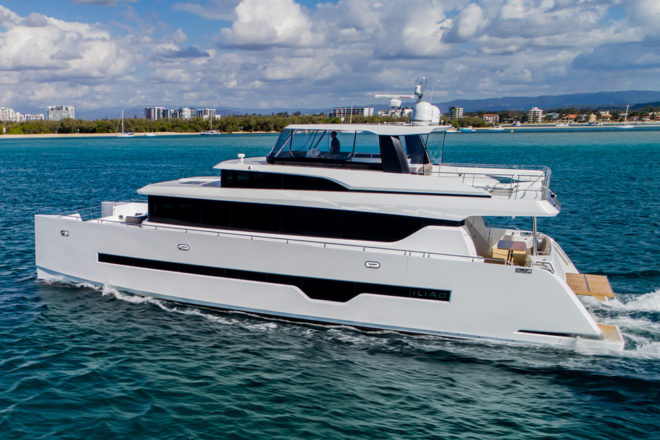 ILIAD Catamarans builds in Zhanjiang and launched its 70 last year

Three units of the ILIAD 50 – which has a 2,500nm range – have already been delivered, two to Southeast Asia and one for Australia. The 70, which has a range of nearly 5,000nm, made her debut at the Sydney show last August, while the second hull has been sold to Asia.

The next model in the range to appear will be the 60, which has already secured multiple sales, and buyers have also come forward for the flagship 90, which will have helicopter-landing facilities.

ILIAD’s catamarans are built at the Yuanhe Xinlong shipyard in Zhanjiang and the company is gearing up for increased production by building a new shed measuring 300m by 45m (13,500sqm), which will enable eight large catamarans to be constructed at the same time.

Heysea, also in Guangdong, is currently China’s most prolific superyacht builder and recently launched its first Atlantic 115, Dopamine, which has a top speed of 24 knots. The yacht, developed with Heysea’s US dealer Atlantic Yacht & Ship, will be followed by deliveries of the yard’s first 126ft model in March and a 139-footer, also sold.

Heysea, China’s most prolific superyacht builder, is completing a 139-footer

The company employs about 200 staff plus subcontractors at its site in Jiangmen and is building a second facility in Zhuhai that’s scheduled to open for production towards the end of 2020.

Later this year, Heysea plans to again attend the Sydney International Boat Show (Jul 30-Aug 3) in Australia – where it’s represented by Morgan J Ross Marketing – and the Fort Lauderdale show for exposure to the US market. Heysea is building a second production site in Zhuhai

It also expects to return to the Cannes Yachting Festival, where co-founder and Chairman Allen Leng led its show debut last year, albeit only with a booth. Heysea is also in the process of appointing new dealers for Europe and Asia.

Ocean Alexander and Horizon have long been Asia’s most prolific superyacht builders and are among many shipyards based in Kaohsiung in southwest Taiwan. Ocean Alexander is seventh on this year’s Global Order Book, with 31 projects at an average length of 31.7m.

It has traditionally been focused on the US, where it also owns marinas, operates service yards and a large dealership, Alexander Marine, that also represents other brands including Tiara and Galeon. 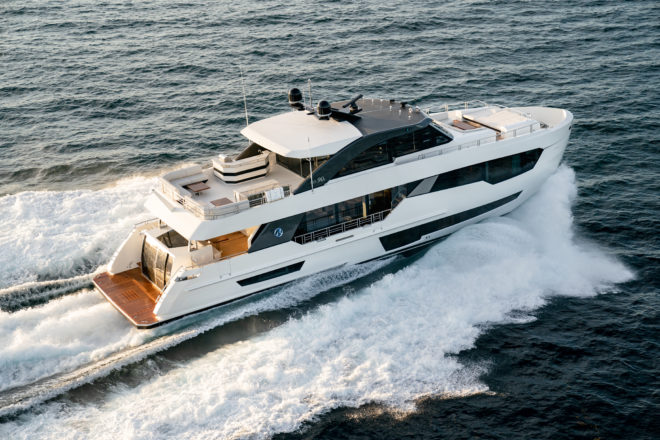 Last September, however, the company made its debut at the Cannes Yachting Festival and staged the European premieres of the 90R, which debuted at Fort Lauderdale in late 2018, and the 45 Divergence, which had its world premiere in Miami in February 2019 and is the company’s smallest model by some distance.

CEO Johnny Chueh, whose father Alex founded Ocean Alexander in 1977, said he was increasingly looking to diversify the company’s markets.

“About 90 per cent of our production goes to the US, where we have a very high market share, about 40 per cent for the bigger models, so it’s almost impossible for us to grow,” said Chueh, who succeeded his father as CEO in 2000. “As we started thinking about Europe and other regions, we thought we could develop best in international markets with our new Revolution series and the 45, as our other lines are more obviously designed for the American market.”

The 45D – available in Sport and Coupe models – is built at the shipyard’s smaller Merritt Island facility in Florida, where it also manufactures the 70e, its second-smallest model.

Ocean Alexander’s newest model is the 84R, the second model in the Revolution series, which debuted at Fort Lauderdale last November, a year after the 90R. 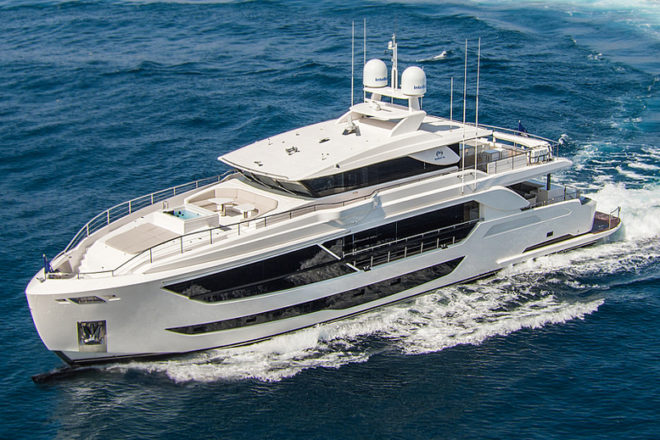 Horizon has traditionally had a much wider distribution spread around the world due in large to the leadership of CEO John Lu, who co-founded the company in 1987 and has long-term relationships with dealers in the US, Australia, Europe and Japan.

It recently appointed Phuket-headquartered Derani Yachts as its dealer for Thailand, Malaysia and Singapore.

Listed ninth on this year’s Global Order Book with 24 projects at an average length of 29.6m, the builder has about 800 staff working across its four sites in Kaohsiung. It continues to focus on its FD (Fast Displacement) series designed by Cor D. Rover, last year debuting the FD77 at the Palm Beach show and the FD77 Skyline at Sanctuary Cove.

In January, it added to its FD portfolio by unveiling the FD75 and FD102 at its marina in Kaohsiung, and the models are expected to make their international show premieres at Palma and Cannes respectively. In addition, the first FD92 will be launched in the summer, while an FD125 is in development. Horizon (FD75 pictured) is represented in Thailand, Malaysia and Singapore by Derani

“The FD series has seen record sales in the last four years, with 20 yachts sold and delivered to clients from the US, Australia, Europe and Asia,” Lu said.

Furthermore, Horizon is developing 6D infusion technology that can be used on FRP hulls over 140ft. By using a one-shot process for the hull, complete with stringers and girders, Horizon states that its hulls are now eight per cent lighter compared to only infusing the hull shell and 40 per cent stronger than the hand-laid process.

Like Horizon, Johnson Yachts was founded in Kaohsiung in 1987 and today has about 250 staff in its 12,600sqm facility, which has two test tanks and can build up to six semi-custom vessels up to 130ft. Johnson, which has a long relationship with UK-based Dixon Yacht Design, debuted its 80 last year and is scheduled to the launch the 70 in the second half of 2020, both new models joining an updated range that also features the 93, 110 and 115. Construction began on the latter last year.

Open to customisation, the Johnson 70 has an 18ft 3in beam and an interior by Design Unlimited, with the option of three or four staterooms, and the choice of an open flybridge or an enclosed skylounge.

Peter Chang, General Manager of Johnson Yachts, said: “With the design of the Johnson 70, we have a yacht developed to be versatile. We want to create a new line of yachts that sets the trend rather than follows it.”

The builder exhibits each year at Fort Lauderdale and has strong representation around the world, with individual dealers for the US west coast, US east coast, Europe (three), Japan, Southeast Asia, Australia and New Zealand.