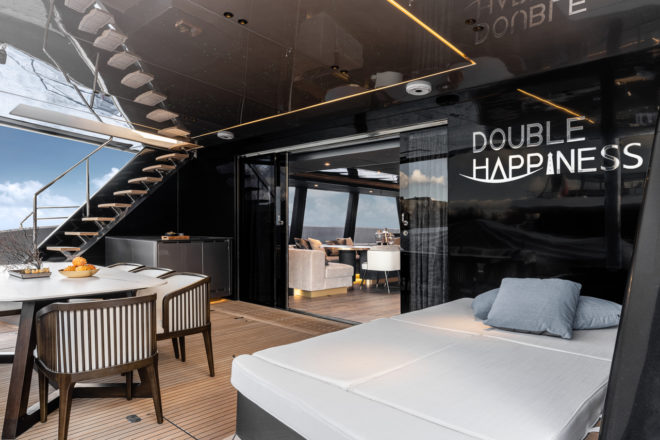 Double Happiness is the first catamaran for the Chinese client, who has owned a monohull; Photos: Katarzyna Seliga-Wróblewska, Marcin Wróblewski / Fotomohito

Double Happiness was sold by Sunreef’s exclusive broker in China, Speedo Marine, which is headquartered in Shenzhen and has offices up and down the coast, from Hainan Island in the south to Dalian in the north.

Francis Lapp, CEO of Sunreef, said: “The Chinese market has outstanding potential when it comes to luxury goods in general. The increasing popularity of yachting among Chinese customers is a trend that we observe with enthusiasm. We are happy to have James Li and Speedo Marine on board while we explore the possibilities of this important market.” 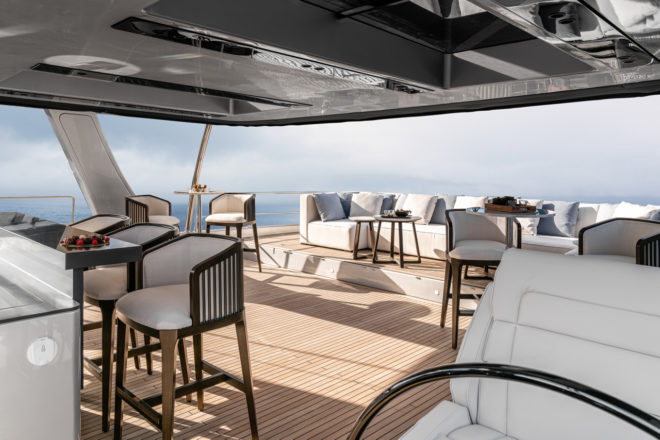 The flybridge has a karaoke bar, cocktail tables and oversized lounging sofa

First showcased at the 2018 Cannes Yachting Festival, the enormous Sunreef 80 is already one of the Gdansk builder’s best-selling models. Customised to her owner’s specifications, Double Happiness takes her name from a traditional Chinese ornament and a symbol of marriage.

Her large twin hull provides a huge saloon with plenty of living space, while the enormous flybridge is another key socialising area and features a karaoke bar, cocktail tables and an oversized lounging sofa. Notable features include a ‘starry sky’ ceiling in the cockpit, decorative ceiling mirrors in the saloon and the use of optical fibre fabrics. 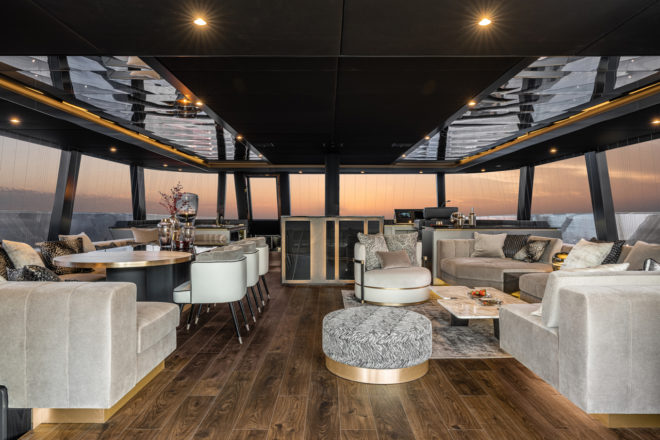 The saloon has decorative ceiling mirrors; black, grey and gold dominate the décor

The bespoke interior décor is a blend of black, grey and gold. The hulls feature three beautifully appointed guest cabins and a lavish master suite with a sofa, vanity, walk-in dressing room and a vast bathroom. There are also three crew cabins including two in the forepeaks.

The rig features a 200sqm mainsail, 340sqm gennaker, a 135sqm genoa and 70sqm staysail, while auxiliary power comes from twin 280hp engines. Lapp says the yacht is also ideal for exploring Asia, once it finally settles down in Shenzhen and Covid-19 restrictions are lifted.

“I’m happy about the Sunreef 80 going to China as it’s perfect for sailing down to the Philippines or other parts of Asia. From Shenzhen, you can be in the Philippines in two to three days and spend two weeks there,” said Lapp, who founded Sunreef in 2002. 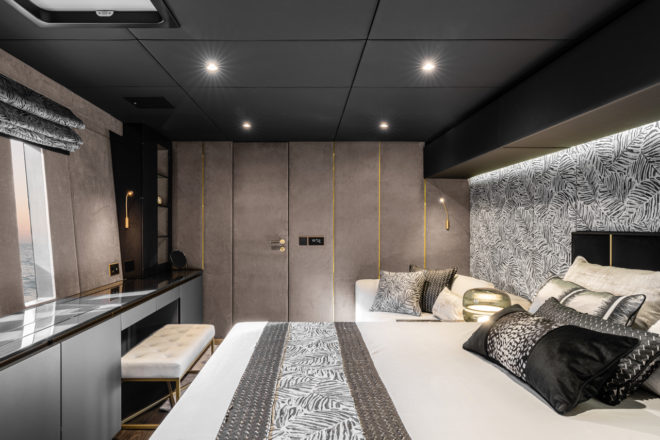 The four guest cabins include a starboard master suite (pictured)

“This is the plus for a catamaran because it’s safer for long distances and a longer range, as it’s more complicated for a monohull to go in big seas. You have 4,000nm range with 20,000 litres of fuel.”