Leopard, founded in 2000, actually sells more powercats than sailing yachts in Asia, although it produces three times as many of the latter each year for the global market. 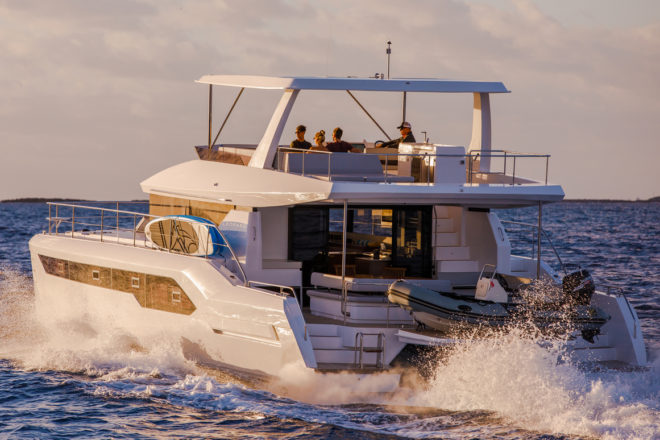 The Leopard 53 PC debuted at the Miami International Boat Show in February; the first unit into Asia, hull three, was in Singapore by March

Leopard is one of the world’s leading catamaran brands, with over 2,000 units built over the past two decades by Robertson & Caine in South Africa, a figure that includes charter cats for sister companies The Moorings and more recently Sunsail. Annual production comprises about 150 sailing cats and 50 powercats, the latter generally between two models.

The brand’s new flagship powercat, the 53 PC, debuted at the Miami International Boat Show in February before the first hull into Asia arrived in Singapore the following month. The model succeeds the hugely popular 51 PC – 137 hulls built since 2013 – and complements the existing 43 PC, with over 100 units produced since 2015.

Kit Chotithamaporn, Leopard’s Yacht Sales Manager – Asia, says: “Yachting is still relatively new in Asia so the majority of buyers are power boaters as it’s easier to get into. In general, Asia will remain a power market and I expect it to grow as existing powercat owners will eventually upgrade and some sailing cat owners will also switch as they get older.”

Leopard – which currently has no plans to build significantly bigger powercats – says its key markets in Asia are Singapore and Thailand, led by Phuket as the region’s leading cruising destination. 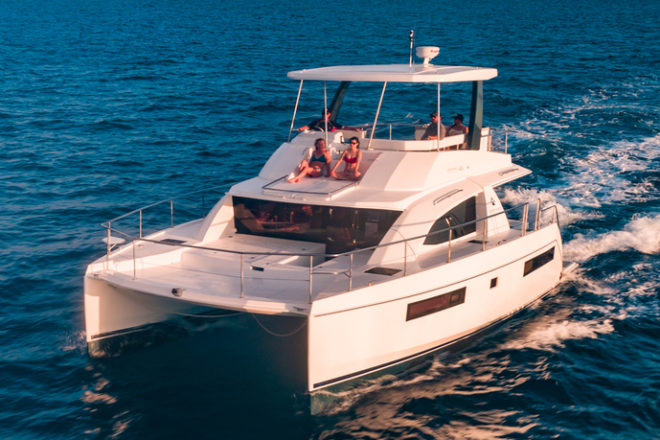 “Leopard powercats suit cruising around Phuket as most of the waters are shallow, especially in Phang Nga Bay. Due to their shallow draft, Leopards can reach areas normally off limits. The high speeds also fit well as owners are able to reach multiple locations in a single day for day trips as there are so many great destinations in such close proximity,” Kit says.

“In Singapore, owners increasingly understand the advantages of a catamaran – space, fuel efficiency and value. A 50ft catamaran would be equivalent to a 60-70ft monohull, especially on a Leopard powercat with its massive flybridge. Fuel consumption would be half or even less, so we expect more monohull motor yacht owners to also make the switch as they start to see the benefits.”

In China, Aquila is moving up and down in model length as it plans to double its range while maintaining a strong share of the US motor yacht market and growing its international reach. The brand debuted its 32 at Miami last year to complement its 36, 44 and 48, while four new models are also in build in Hangzhou, southwest of Shanghai. 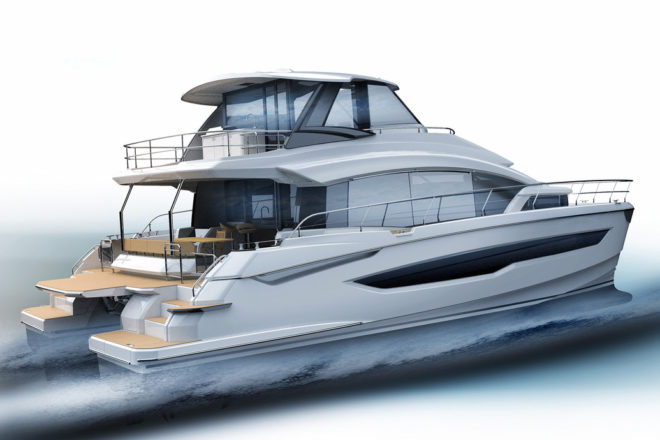 Sino Eagle founded the brand in 2012 with the cooperation of MarineMax, the largest distributor in the US and a leading charter company in the British Virgin Islands. Frank Xiong, CEO of Sino Eagle, said Covid-19 had temporarily affected production but that the facility had been able to resume normal working operations in March.

“Being in China, the first area to experience the Covid-19 virus, Aquila was lucky enough to be among the first shipyards to return to normal,” Xiong said. “It allowed us to focus on existing commitments and prioritise production based on customer demands and available shipping routes.”

Despite the coronavirus, 2020 is still set to prove a breakthrough year for Aquila as the brand will launch its 54 and flagship 70 models over the summer in time to head to the US for their world premieres at the Fort Lauderdale International Boat Show (Oct 28-Nov 1).

Both have enclosable flybridges and the option of four or five cabins including a forward master cabin that spans both hulls. The 54 is predicted to hit 25 knots with its 600hp Volvo Penta engine options and have a range of 1,100nm, while the 70 is expected to have a similar range of 1,117nm and hit 24.5 knots with twin 1,000hp Volvo Pentas. 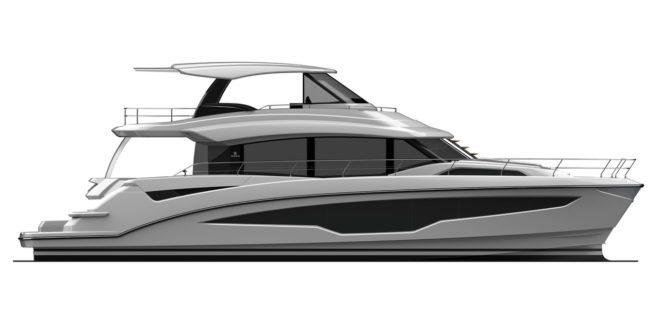 Yvan Eymieu, Aquila’s International Sales and Distribution Manager, says: “The demand for bigger powercats is a natural evolution of the motor yacht market as customers look for better stability and performance, while new material and technology offer the possibility to build higher-performance motor catamarans. Catamarans took a large share of the sailing industry and we are observing a similar trend in the motor yacht segment.”

Furthermore, Aquila is widening its range at the smaller end, creating a 28 as an outboard day-cruiser and developing purpose-built ribs for their 54 and 70.

Today, about 50 per cent of Aquila’s annual production is for private owners in the US, 25 per cent is for the MarineMax charter fleet and the rest of the world accounts for 25 per cent, compared to just a few per cent in its first few years.

That’s due in large to the brand actively growing its profile in Asia since 2018, building a dealer network that includes Simpson Marine for Hong Kong, Taiwan, Thailand, Malaysia, Singapore and Indonesia, and Saigon Yacht & Marina for Vietnam, Cambodia and Myanmar. 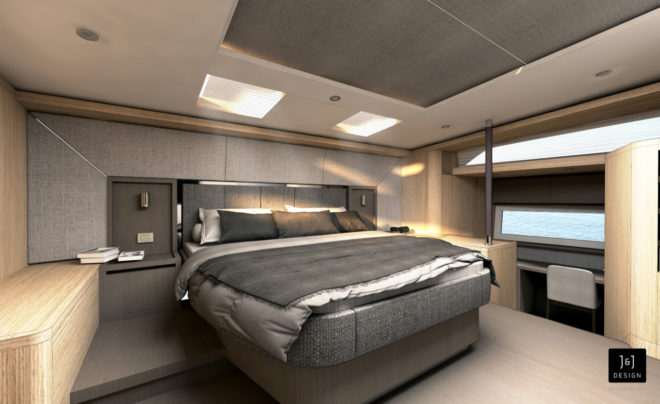 “We now have a strong, reliable distribution network in Asia and Australia. The teams know the products well and we’ve delivered boats to most key Asian yachting markets,” Eymieu says.

The Hong Kong-based Frenchman also stresses that Aquila targets the motor yacht sector of the market and doesn’t actively compete with other catamaran brands. “Our main competitors are the monohull motor yacht brands in the inboard segment. The Aquila 36 has such an innovative design that it created its own demand.”

As evidence of the latter, he cites the 12 months leading up to June 2019, where Aquila ranked fourth in the US motor yacht market from 35- 37ft and fifth from 36-48ft – behind the likes of Tiara and Sea Ray – when also counting the 44 and 48 models.